Wow! Woman Who Didn’t Know She Was Pregnant Gives Birth In Car Park As Dad Worked Inside 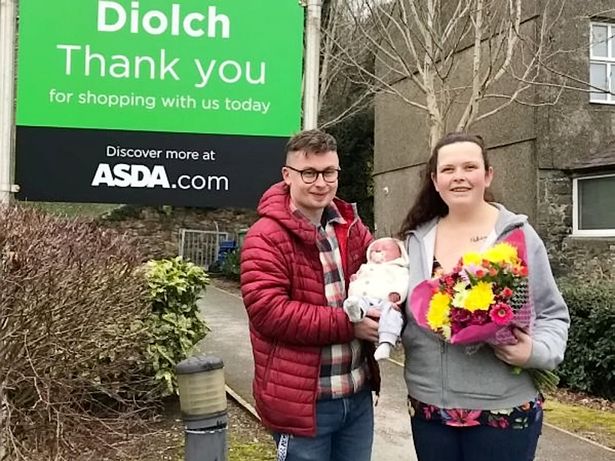 Delyth Jones, 25, thought she was suffering from appendicitis but gave birth to Harry half an hour later with Dean Stawman unawares (Image: SWNS)

The story has been told of a woman who had no idea she was pregnant has given birth in an Asda car park.

She gave birth in the park just feet away from her partner who carried on working in the store.

Delyth Jones, 25, thought she was suffering from appendicitis when her contractions started and gave birth to Harry half an hour later.

Paramedics who had been taking her to a maternity ward were forced to stop at the store where her sister Kate also works in Pwllheli, Wales.

Meanwhile her partner Dean Stawman, 26, finished his shift there oblivious to the drama that was unfolding just feet away.

He only found out he was a new dad when he got home, WalesLive reports.

Delyth said: “I’ve had a pain like that before and had been rushed in before, so assumed it was something similar. I phoned my mum and sister thinking it could be back so they came over to help me.

“When they got there the pain changed and the next thing I knew I was on the floor. Then half an hour later he was born.”

Kate said: “We rushed over to help because she wasn’t feeling well and we thought it was appendicitis.

“At one point she said, ‘I think I’m having a baby’, and we laughed. So it was quite a shock when it turned out she was right. She really had no idea she was pregnant. She wasn’t showing and didn’t feel the baby move.”

Delyth said she knew the ambulance had stopped at Asda, but everything happened so quickly after that.

She didn’t have time for any pain relief – “just a couple of gulps of gas and air” – before Harry was born, weighing in at a healthy 7lbs 7oz.

Delyth and Harry were taken to Bangor Hospital for checks, but were home within 24 hours.

“The community midwife was around and jumped in the ambulance at Asda and 10 minutes later he was delivered.

“I said to them, ‘Tell me I haven’t just given birth in Asda’ and they said I had – and that it would be listed as his place of birth on his birth certificate.

“It must be fate that he was born at Asda with our connections there.”

Delyth and Dean, who’ve been a couple for seven years, have been telling shocked friends and family their wonderful news, and after they’ve got over the surprise she says everyone’s delighted for them.

She said: “It’s been such a whirlwind, but it’s been so good and I have absolutely loved it. I wouldn’t change any of it.

“Dean knew I’d had a couple of pains the night before and knew I wasn’t well, but we decided he should go to work as usual.

“He arrived home just as I was giving birth in Asda. As soon as he found out he was ecstatic.”

- Advertisement -
Share
Facebook
Twitter
Pinterest
WhatsApp
Previous articleBitter Dad Caught Peeing On Ex-Wife’s Grave Every Morning, Despite They Have Been Divorced For 48 Years
Next article24-year-old Woman Falls To Death Off Hotel Balcony In Ibiza