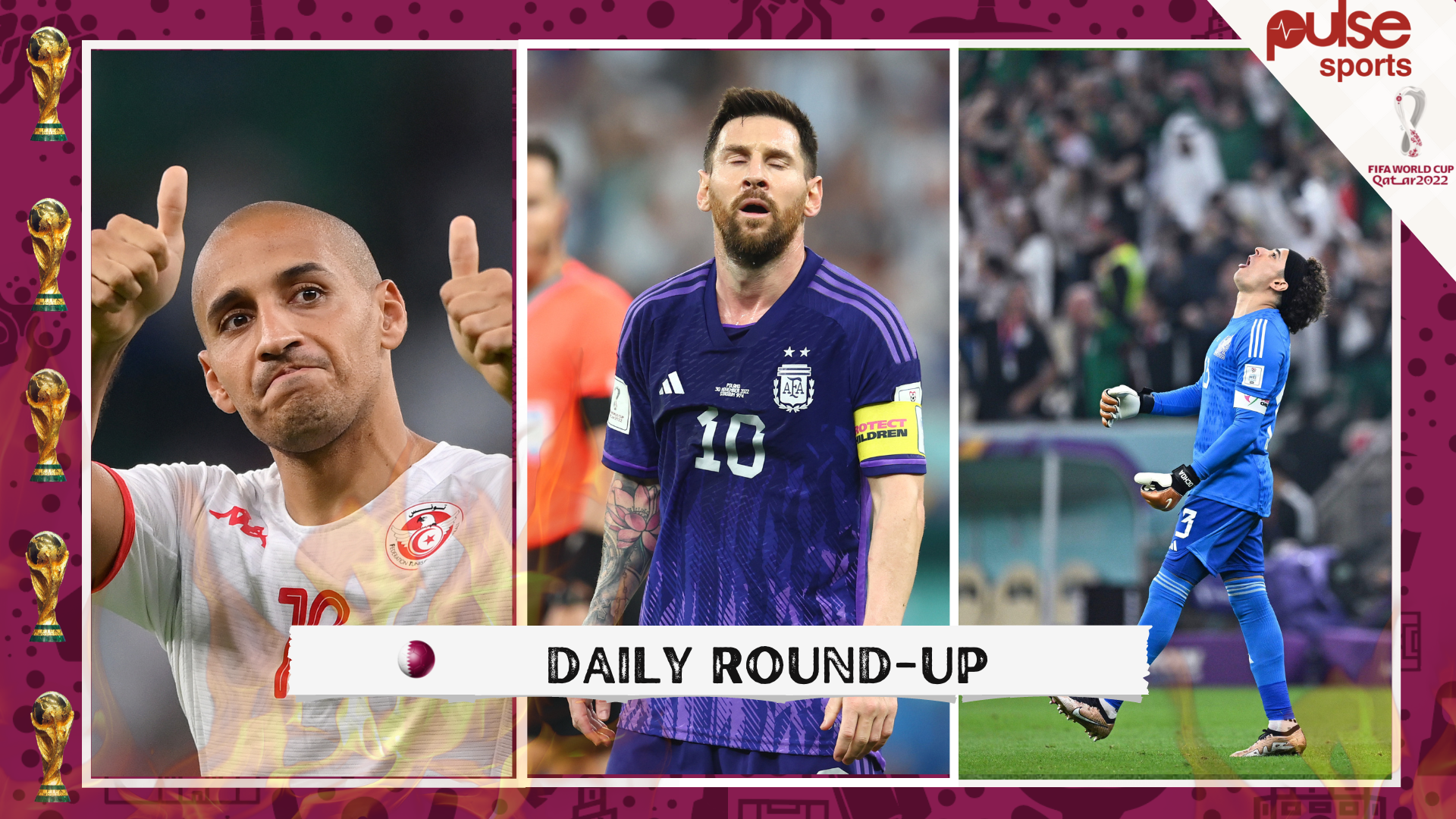 Arguably the biggest talking points of the day came from Tunisia’s shock win over a largely second-string France who had already booked their place in the round of 16.

The Carthage Eagles entered the game knowing that they needed a win and a favourable result in the game between Denmark and Australia to qualify, and it showed in their urgency and approach to the game.

Tunisia contained France, who made 10 changes to their starting lineup, and forced them into sterile possession in the opening half while creating chances on the counter-attack and threatening to score on a number of occasions as the awkward French defence that had Real Madrid midfielder Eduardo Camavinga at left-back struggled to deal with Tunisia’s breakaways.

For most of the game, France played with the verve and drive of a retirement benefit friendly game, and it was not entirely against the run of play when Tunisia took the lead after 58 minutes through a superb Wahbi Khazri solo goal.

The goal seemed to galvanize France who responded by bringing on Kylian Mbappe, William Saliba, Adrien Rabiot, and Antoine Griezmann in quick succession in a bid to rescue the game from the jaws of defeat.

France upped the ante and thought they had gotten an equaliser with the last kick of the game, but a VAR review after the final whistle ruled out Griezmann’s goal to confirm France’s first defeat in six World Cup games. Despite the valiant effort, Tunisia’s win was not enough to see them through after Denmark fell to Australia in the group’s other match.

Denmark entered the 2022 FIFA World Cup as the dark horse to claim a maiden World Cup title but left without a win in three games and with performances as jaded as the toned-down emblem on their jerseys.

Their 1-0 loss to minnows Australia summed up a miserable World Cup for them filled with poor finishing and lacklustre defending. Despite needing a win at all costs, Denmark were lethargic at both ends of the pitch and paid the price by suffering a loss that left them bottom of the group with only one point.

The win which was only Australia’s second in 12 World Cup matches, has now seen them match the country’s best-ever performance at the World Cup and has set up a mouth-watering tie against Argentina in the next round.

Mexico were eerily close to getting knocked out of the World Cup group stages by the fourth tie-breaker which considers yellow and red cards but instead conceded to Saudi Arabia in injury time to confirm their place on the plane back home via a worse goal difference than Poland.

Despite a credible 2-1 win over a Saudi Arabian side that beat Argentina, Mexico were unable to reach the round of 16 for the first time in eight attempts, as they crashed out after conceding three goals in the groupstage, while Poland survived by the skin of their teeth against Argentina.

Mexico huffed and puffed and threatened to blow the Saudis out of the water, but unfortunately for France, as expected, it wasn’t long before Henry Martin swept home a team goal just two minutes after the restart. They soon doubled the lead thanks to a moment of pure magic from Luis Chaves who curled in the first freekick goal of the Qatar 2022 World Cup to make it 2-0 to Mexico.

A 2-0 lead and results from the Poland-Argentina match at that time created a unique situation where both teams were tied on points, goal difference, and goals scored, and were to be separated based on their disciplinary record.

Because Poland had fewer yellow cards than Mexico, EL Tri went into the final stages of the game knowing they needed another goal to advance ahead of Poland and pushed forward in search of that goal.

Unfortunately, this backfired, as in the 5th minute of injury time, Salem Al-Dawsari scored for Saudi Arabia after a swift counter-attack to drive a dagger into the hearts of Mexican fans. Like Tunisia before them, Mexico found out the hard way that it is always best to have your destiny fully in your hands heading into the last group game.

There will be a lot of talk about Messi’s missed penalty and how goals from Alexis Mac Allister and Julian Alvarez spared his blushes, but more should be said about Wojciech Szczesny and the masterclass that he put on at Stadium 974 to single-handedly keep Poland in the World Cup.

Szczesny saved his second penalty in as many World Cup games with the score at 0-0 in the first half to cement what has been the best half of goalkeeping so far at the 2022 World Cup.

In addition to becoming only the third goalkeeper to save two penalties at the same World Cup tournament, the Juventus man also made seven first-half saves, which is one less than any other goalkeeper has made in 90 minutes so far in Qatar.

His saves and little else kept the score at 0-0 despite Argentina creating three big chances in the first half and accumulating an xG of 2.0.

He was eventually beaten twice by goals from Mac Allister and Alvarez, but he continued to show up big for Poland with five more important saves in the second half, totalling a tournament-high 12 saves in a single match.

Seeing as Poland only scraped through on goal difference, in the end, the importance of Szczesny’s heroics cannot be overstated and they will be hoping he still has some in store for them when they face favourites France in the second round.