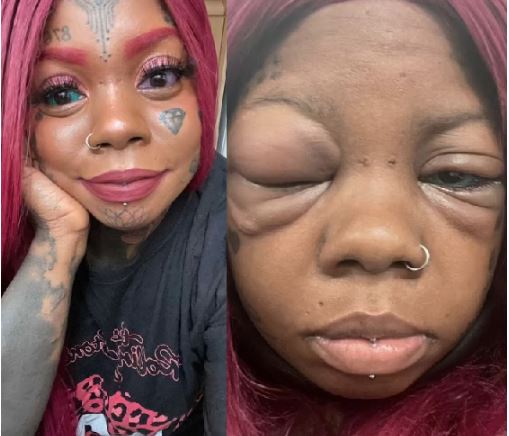 In what will come across as a really startling development, a mother-of-five, Anaya Peterson has almost lost her eyesight.

She admitted she regrets not listening to her seven-year-old daughter’s warning she could go blind if she got her eyeballs tattooed – because she’s now losing her sight.

Law student Anaya Peterson was inspired by ‘blue-eyed dragon’ Amber Luke, an Australian model who got her eyeballs inked blue in 2019 – before going temporarily blind for three weeks.

Anaya, who is 32 and from Belfast, was left hospitalised by the eye alteration and is facing permanent blindness after a suspected reaction to the eyeball ink

The mum, who also has a tongue split and facial tattoos, now says she wishes she could have done things differently.

The body modification fanatic got her right eyeball tattooed blue in July 2020 and despite dealing with headaches and dry eyes as ‘part of the healing process’, decided to get her left eye dyed purple in December that year.

After months without complications, Anaya was shocked to wake up in August last year with ‘swollen’ eyelids as though her ‘face had been inflated with air’ and looking like she’d done ‘five rounds with Mike Tyson’.

As the swelling continued to get worse and worse, Anaya checked herself into the hospital’s A&E ward, after prescribed antibiotics did nothing to reduce the ‘severe inflammation’.

The tattoo enthusiast had ‘medication given through a drip’ for three days, before having a biopsy performed on her problematic eyeball the following day.

Anaya claims that her daughter India was never on board with the unusual tattoo, as she feared that her mum would ‘go blind’ – which she claims she now faces as her sight deteriorates.

Anaya said: ‘I was just going to get one [eye tattoo] at first because I thought that if I go blind, at least I’ve got the other eye. I should have stuck with that.

‘My daughter told me that I didn’t want to do that [the tattoo] asking, ‘what if you go blind?’ She wasn’t on board with it at all.

‘It kept getting worse and worse. I looked like I’d done ten rounds with Mike Tyson.

‘I took the option to go [to hospital] myself. They gave me surgery and took samples of my eye.

‘They wouldn’t have been able to do it while I was awake, I would have been an absolute nightmare, so they put me to sleep.

‘I just wanted to be at home watching [TV] to be honest. I can’t even put it into words. It wasn’t nice at all whatsoever.

Although Anaya left the hospital surgery ‘on the mend’, the ordeal has left the parent regretting her choice to follow in the footsteps of alternative Aussie Amber Luke.

Anaya has been told by ophthalmologists that she is now at a very high risk of contracting glaucoma, and her eyesight is already worsening, with her vision clouded by ‘hundreds of thousands of floaters’.

The student claims she is being supported by her university and is being provided with applications to make reading easier, as well as counselling.

Anaya is still maintaining a positive mindset, and claims that the negative comments she receives online about her alternative appearance are just par for the course.