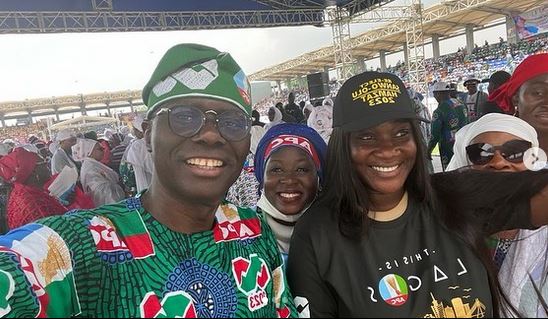 Popular Nollywood actress, Mercy Johnson has joined Lagos State Governor, Babajide Sanwo-Olu and others in the women’s rally for All Progressive Congress (APC) presidential candidate Bola Tinubu ahead of the 2023 general elections.

Mercy who was named in APC women presidential campaign council on October 1, shared photos from the rally in an Instagram post on Wednesday.

In the photos, the actress could be seen with the governor and other APC women leaders in the Southwest.

Captioning the photo, Mercy noted that as a woman and wife to an APC candidate, she is confident that the party’s plan is in line with the “35% affirmative action for women.”

She wrote: “Earlier today, I joined His Excellency, Babajide Sanwo-Olu @jidesanwoolu and the incredible women leaders that make up the APC Women Presidential Campaign Team’ at the APC women Southwest Rally.

“As a woman, wife to an APC candidate @princeodiokojie and mother, I am confident in the APC plan for women which is in line with the 35% affirmative action for women. From the goodwill messages and conversations with the women leaders, I was opportuned to hear from the horse’s mouth and I have renewed hope and confidence in the good intentions, great plans and actions to follow for the women of Nigeria and for the people of Nigeria”.